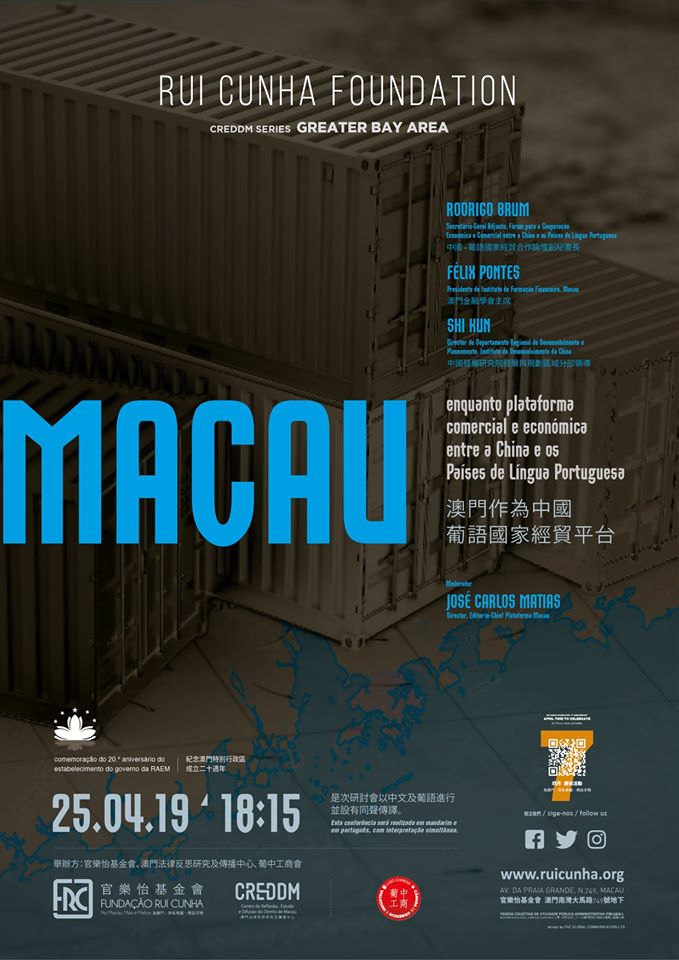 Organized by Rui Cunha Foundation and the Macau Delegation of Portugal-China Chamber of Commerce & Industry (CCILC), a seminar on “Macau’s role as an economic and trade platform between China and Portuguese-speaking countries” was held previously.

Given its similarity to the administrations and laws of Portuguese-speaking countries, as well as its familiarity with the Chinese market, Macau acts as the perfect bridge of cooperation between China and the Portuguese-speaking world. In recent years, opportunities and challenges have been presented to Macau through China’s major policy projects, demonstrating Macau’s position in the national strategy. It is hoped that through the seminar, the role of Macau in the development of these projects can be explored in depth and discussed among experts.

In his presentation, Rodrigo Brum said that “Macau needs to diversify its economy to strengthen its positioning as an economic and commercial platform between China and Portuguese-speaking countries.” Also, “there is still a great deal of scope for development of trade and investment relations, which can provide support for small and medium-sized enterprises, as well as young entrepreneurs and companies in specific sectors.”

Shi Kun believed that “Macau's sustainable development must follow the path of moderate and diversified economic development.” Regarding the future development plan of Macau, he suggested “to expand the area of Macau, enhance economic activities and trade within the Greater Bay Area’s cities and Portuguese-speaking countries, participate in developing technological innovation as well as focus on industrial development.”

Félix Pontes explored the business opportunities created by the Greater Bay Area’s project for the financial institutions involved. It is believed that “Macau will position itself as a world centre of tourism and leisure, serve as a platform for trade cooperation between China and Portuguese-speaking countries and develop a financial system with its own characteristics.”

This was the first time that Rui Cunha Foundation and CCILC cooperated marking the beginning of future collaborations. With full house attendance, the Seminar attracted experts and players from various sectors and interests in the society. Audiences were benefitted from the discussions and gained important insights from the speakers about the development of the Greater Bay Area and how Macau will benefit and contribute for this important national project.