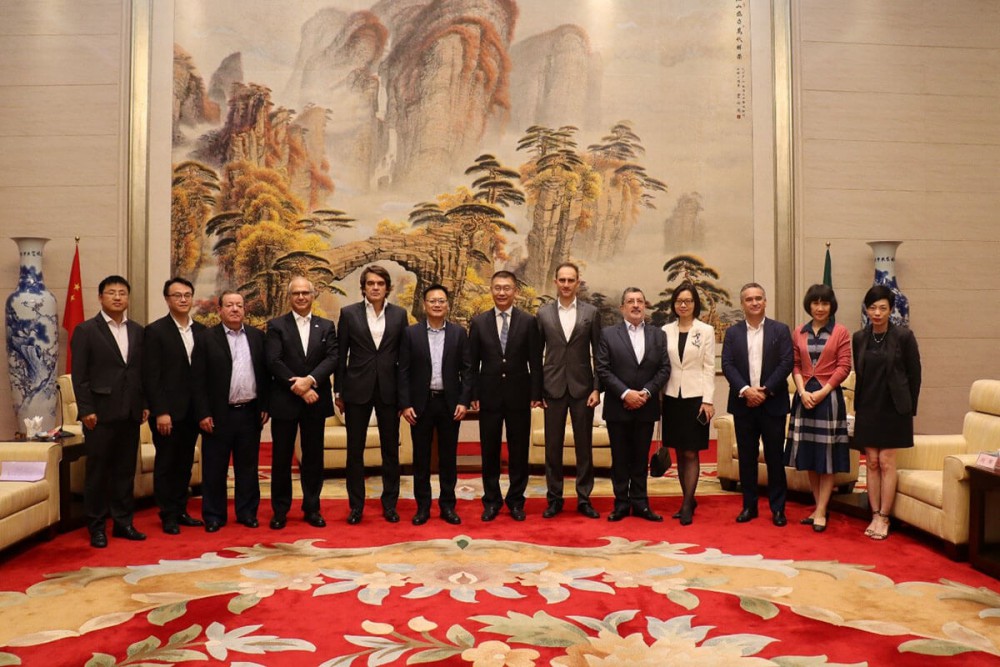 Bernie Leong, President of the Board of Directors of Macau Delegation of the Portugal-China Chamber of Commerce and Industry (CCILC), recently paid a visit to the Liaison Office of the Central People's Government in the Macao SAR (the “Liaison Office”), and exchanged views with Deputy Director Yao Jian, Deputy Head of Economic Department Zhu Hong and other officers in the Liaison Office. Through the visit, CCILC-Macau aims to have a better understanding of the policies regarding the China-Portuguese-speaking Countries platform as well as its future development direction.

Yao Jian cordially received the delegation of CCILC-Macau, which is also CCILC-Macau’s first visit to the Liaison Office. Yao Jian said he went on a study tour in Portugal in June and visited local power facilities and green energy sector. The Macau SAR Government has been stepping up efforts to diversify its economy, and the outlook for Macau is rosy. Yao Jian hoped that CCILC can seize opportunities to introduce environmental protection technologies and projects from Portugal and Europe into Macau and other cities of the Guangdong-Hong Kong-Macau Greater Bay Area (GBA) so as to promote further cooperation between Portugal and China to achieve a win-win situation. Macau has seen rapid development in the past 20 years, but the city’s land resources is limited. Therefore, Yao Jian suggested CCILC explore business opportunities in Hengqin, GBA and cities along the Belt & Road Initiative. Meanwhile, he hoped that CCILC could take part in the 6th ministerial conference under The 2020 Forum for Economic and Trade Co-operation between China and Portuguese-speaking Countries (Macao) (the “Forum Macao”), set up a permanent secretariat in Forum Macao and strengthen communication with related government departments of Macau SAR. CCILC can start from Macau and actively explore the eight Portuguese-speaking Countries, thereby fully using its geographical and cultural advantages, Yao Jian said.

Bernie Leong expressed gratitude to Yao Jian’s reception and advices for CCILC. When introducing the background of CCILC, he said CCILC was founded in 1978, the year when China started its reform and opening-up. As a nonprofit-making organization committed to forging closer economic and trade ties between China and Portugal, CCILC has been dedicated to facilitating and providing a communication platform for the economic and trade cooperation between China and Portugal. Founded in 1992, CCILC-Macau aims to strengthen economic and trade relations between China and Portuguese-speaking Countries. To this aim, CCILC-Macau will continue bringing in more corporate members. On the platform provided by CCILC-Macau, enterprises from China and Portugal can communicate on different projects and promote their cooperation. Bernie Leong said CCILC-Macau will closely communicate with the Liaison Office on different projects. On top of that, CCILC-Macau will actively explore environmental technology and projects, and take part in the 6th ministerial conference. Bernie Leong also asks the Liaison Office to give more guidance and advice on how enterprises can further promote the development of mainland, Portuguese-speaking Countries and Macau.